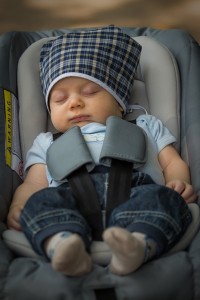 1. Be as quiet as possible and block out background sounds, so babies aren’t woken up by the sounds you make at night.

2. Allow babies to hear a variety of background sounds, so they learn to sleep through them.

In my experience, a hybrid of both of these ideas worked the best.

I’d start off quieter at bedtime when my baby was in the early stages of sleep.

Then gradually as they got deeper into sleep, I’d be less quiet so they would get used to the sounds of me walking around, etc. I wouldn’t be as loud as I was during the day – but I wouldn’t be extremely silent either.

I’d use a background noise sound loop that I made (see below) to help set the mood for sleep and then fade it off as they fell asleep.

In this way, I set them up for sleep – but they weren’t dependent on a noise generator running all night – or – on perfectly quiet home all night to be able to sleep.

They learned how to sleep with mild house sounds happening in the background. On a subconscious level, this let them know that we were close by and that they were safe.

Here’s a crazy soothing sound loop trick I came up with back in 1996.

My daughter was fussing and having a hard time settling down to go to sleep. I had tried rocking her and singing to her, but it wasn’t working.

I had a crinkly plastic grocery bag in my pocket which I pulled out to put it aside. As I tied it into a knot, it made quite a crinkling sound, and my daughter’s fussing grew a little bit less. I took note of it and being a bit of a common sense scientist – I untied the bag to see if she would be soothed again and Bingo! The crinkling sound calmed her down some more.

Over the next couple of weeks, I began to experiment with the sound of the bag. I recorded a sound loop of the bag crinkling using my computer. I used Sound Forge to manipulate the audio, and I began experimenting. I slowed down the crinkling sound, and every time I altered it, I’d play it for her.  I repeated this process until I found the optimum speed that calmed her down the most.

The crinkle sound was so slow that it sounded like the ocean. It struck me that this might be similar to the sound she heard in the womb.

I made a few tracks of this – offset them in time – and mixed them together – fading them in and out to create the effect of multiple waves coming and going. After that, whenever she was having a hard time getting to sleep, I’d play that sound and it helped her. I never figured out how much I’d slowed down that sound and I don’t have a way to reproduce it now as the sound files were on a computer that is long gone.

To find what works – experiment with your own sounds

If you’d like to try something similar just record a white noise type of sound and play around slowing it down until you get something that sounds like the ocean. Then mix 3 or so tracks in and out. I imagined a heartbeat as I mixed the tracks back and forth to help set the tempo of the cross-fades.

You have your very own built-in white noise generator.

It turns out that for ages people have said, “Shhhhhhhhhhhhhhhh” to calm their babies – which is why that sound is so common when we’re trying to quiet down someone.

Saying, “Shhhhhhhhhhhhhhhh”  comes naturally to us when we’re trying to calm or soothe a baby. It has a valuable ancient and scientific purpose.  It is a type of white noise that is familiar to babies – like the sounds they heard in the womb.

Using the “Shhhhhhhhhhhhhhhh” technique is free and natural. The hardest part is keeping it going for a while.

You are performing – constantly blowing out your breath – which takes a lot of breath support.

You’ll find yourself out of breath after a while. Be mindful that you don’t get too light headed as you’re holding your baby and blowing out. Fainting or getting dizzy and falling with your baby would be bad. You will, however, develop quite nice breath support and you’ll be able to go longer and longer the more you do it.

Some people use an air purifier as white noise. The upfront investment in a home air purifier can range from $59 to $299 – which isn’t cheap, but you also get the benefits of the air purifier cleaning the air.

If you try using this to create white noise –  make sure you get one that uses a fan motor (that’s what makes the white noise sound) and check the reviews to make sure it does a  decent job of cleaning the air since you’ll be paying for it.

I bought a digital noise generator for $69.00 that had various sounds (rain, water, thunder, birds, etc.).  However, it turned out to be more stimulating than calming for my daughter.

Some “bedtime” music can also have this same stimulating effect.

So, be careful before plopping down too much money. See if you can find one that has a money back guarantee so you can test it out with your baby and return it if you have the same result I did.

How to calm a crying baby in 15 seconds:

You can create your own white noise with a hairdryer. It’s handy because most people have a hairdryer around the house already. It’s a little cumbersome because you’ll need to hold the hairdryer and it can use a bit of electricity to run continuously – even on the warm or cool setting. Check out this YouTube video that demonstrates how it can work. It’s another version of “Shhhhhhhhhhhh” to add to your toolbox.

Some people use the tick of a clock to create a constant sound that soothes their baby. This is nice because it has a constant beat – like a heartbeat – however, it wouldn’t mask or block out other background sounds. But it could be an easy technique to test out if you have a ticking clock that you could put into your baby’s room.